Broad vs. narrow definition: In the study of collocations, there have been many suggestions on how the term "collocation" should be defined. In general, we can differentiate between broad(er) and narrow(er) definitions. The broad definitions are primarily geared toward quantitative and statistical analysis and are most commonly found in fields such as computer linguistics or corpus linguistics. They see a collocation as the simple co-occurrence of words within a corpus, regardless of the semantic value of these combinations. The narrow definition, which is geared towards qualitative and semantic research, sees collocations as specific types of phrases that fall somewhere between free word combinations on the one side and idiomatic expressions (e.g. fixed idioms) on the other. Collocations are thus neither "freely" combinable, nor fully idiomaticized. This is why they are often referred to as "semi-fixed". 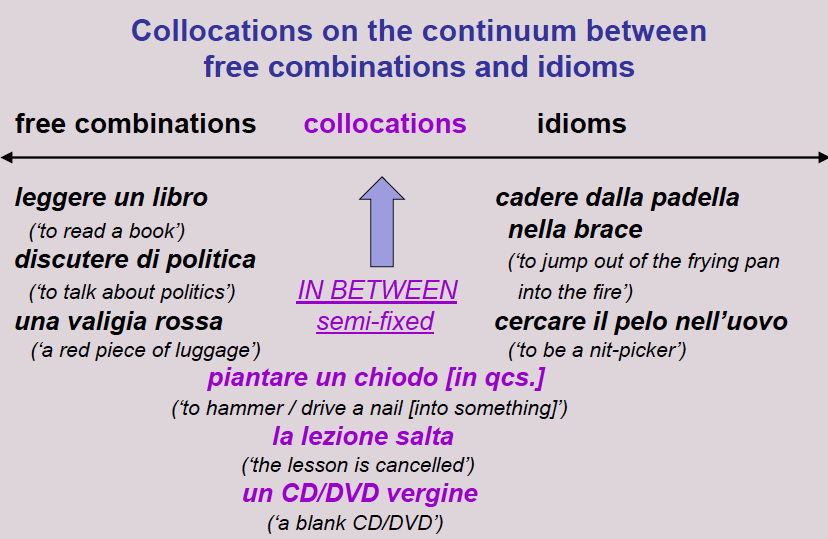 Collocation structure “base + collocator”: According to the narrow, semantic definition, collocations are hierarchically organized, binary word combinations that are made up of two parts: the so-called base and the so-called collocator. The base is hierarchically higher than the collocator (in other words, the choice of collocator is always dependent on the base). The base word is usually used in its literal sense, while the meaning of the collocator within the collocation can be different from the word's basic or literal meaning. The collocator is thus the "unpredictable" half of the pair, the part that may differ from language to language, and the part that foreign language learners often don't know, get wrong or have to look up. For instance, in the collocations piantare un chiodo (‘hammer/drive [lit. “plant”] a nail into a wall’), la lezione salta (‘the lesson is cancelled [lit. “jumps”]’), and un CD/DVD vergine (‘a blank [lit. “virginal”] CD/DVD’), the nouns chiodo, lezione and CD/DVD are the bases, and the verbs piantare and saltare and the adjective vergine are the collocators.

Types of collocations based on morpho-syntactical aspects:

Types of collocations based on semantic aspects:

Exceptions - semi-idiomatic collocations: Semi-idiomatic or partially idiomatic collocations have an idiomaticized collocator, as is the case in un numero verde ‘a (toll)free [lit. “green”] (phone) number’. However, since the base is not used idiomatically (numero = ‘(phone) number’), this type of lexical combination is only partially idiomatic, and thus cannot be considered a full idiom; it is still a collocation because at least one part of the combination is used in its literal sense and the overall meaning can still be derived from the meanings of its parts. Some semi-idioms show an “unusual collocational syntax”, as is the case with divertirsi un mondo (‘to be highly diverted / to have a wonderful time’, lit. “to be a world amused”). In this case, divertirsi is the base because it is the part that can be understood literally, while the modal adverb un mondo is an idiomatically used collocator.

Exceptions - compound words: Certain lexical combinations that are made up of a noun + adjective or prepositional phrase are rendered as compounds (i.e. a word made up of several individual words) in German; e.g. tetto apribile (‘sun roof, sliding roof, retractable roof’) = German Schiebedach / Hebedach. This is mostly the case when a word designates a specific type or subclass of something (tetto apribile = type / subclass of tetto). From a learner’s perspective, there is a collocation-like relationship between the parts of this combination (tetto can be identified as a base, while apribile can be seen as a kind of “unpredictable” collocator that is specific to each individual language). Phrases such as vicolo cieco ‘dead end’ (lit. “blind street”), letto a castello (‘bunk bed’, lit. “castle bed”) and foresta vergine ‘primeval forest / jungle’ (lit. “virginal forest”) must be learned in the same manner as collocations. Therefore, this type of lexical combination will also be included in our learner's dictionary.

The following are examples of collocations that evoke very clear images, and are thus suited to being depicted in drawings and artwork. Depending on the collocation, the imagery for Italian and German can be different or - in a few cases - also similar or identical:

Book publication: The Italian collocations are being collected in a specially built database and will be published as a learner's dictionary in 2015 with the publisher Verlag Helmut Buske (Hamburg).

Selection of the lemmas and collocations: We have decided to base our choice of which Italian collocations to include in our learner's dictionary on structural criteria: only those collocations with a noun base will be included (i.e. syntactic types 1-4 listed under “What we mean by collocation”). The number of bases (which is also the number of lemmas in our learner's dictionary) is currently limited to some 900-1100 nouns that can be found in the basic vocabulary in the Dizionario di base della lingua italiana (DIB) by De Mauro / Moroni (1996). The project team will decide on a case-by-case basis whether or not a lexical combination is to be classified as a collocation (though in general, in order to qualify a combination as a collocation it must fit into one of the 5 semantic collocation types listed under “What we mean by collocation”).

Reference work and learning tool: The learner's dictionary is meant to be used as a reference book, but is also intended for use as an L2 learning / teaching tool. Since the collocations will be laid out in two parallel columns (with Italian on the left and the German equivalents on the right), learners can use the book to test themselves by covering one half of the page to see what they have already learned / already know.

Illustrations: In order to bring certain collocations to life and make them easier to memorize, we will include drawings produced by children and young adults in the book. These images were drawn in Tyrol during various public relations events and in cooperation with several schools in Tyrol (see “Illustrations”).

Preview: Here is a preview of the entry for the lemma dente ('tooth') in our dictionary (click on the entry and zoom in for higher resolution): 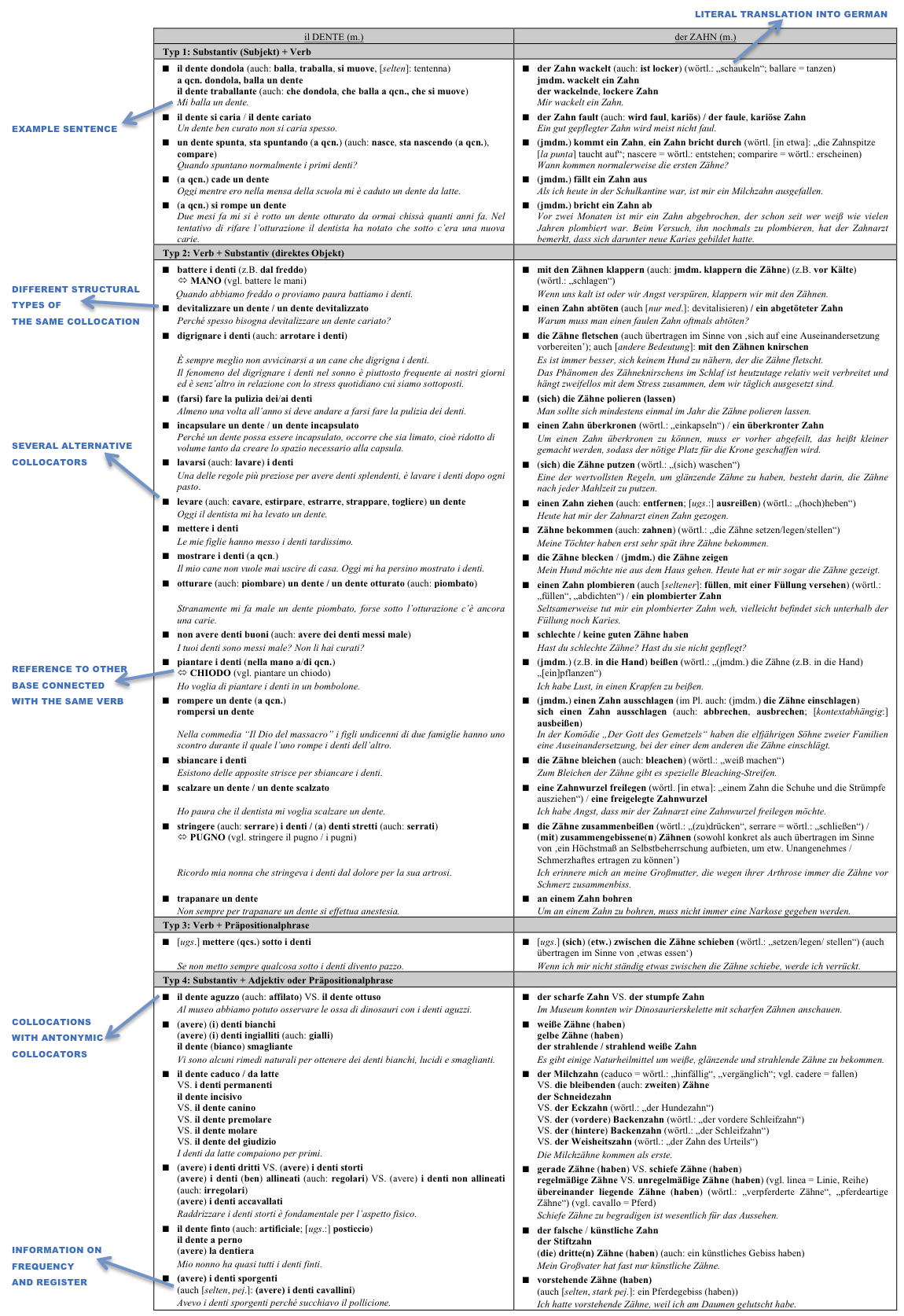 Theoretical premises: In general, we can assume that it is easier to memorize and remember collocations if we have some form of visualization in addition to the purely “abstract” wording.  That is why we plan to include depictions of selected collocations in the learner's dictionary.

What kinds of collocations are suitable for graphic visualization? Not all collocations can be drawn, but it is sometimes possible with those whose collocator is polysemous (i.e. has several meanings) and is used in a metaphorical sense rather than in the literal, basic sense of the word. Moreover, the collocation has to create a clear mental image that can be depicted as a drawing, such as il dente balla (‘the tooth is loose / wobbly / wiggly’, literally “the tooth is dancing”).

Where do we get these images? The artwork depicting selected Italian collocations is created by students (primary school through high school). The drawings are/were made at various events (see below) and in cooperation with schools in Tyrol.

Number of drawings so far: To date, children and young adults from Tyrol have made more than 1000 drawings:

Method: The pictures are always based on the literal meaning of the collocator (e.g. il dente balla means ‘the tooth is loose / wobbly / wiggly’, but is literally “the tooth is dancing”). So far, the dancing (loose) tooth has been one of the most popular motives. Others include a nail being “planted” in the wall (i.e. being pounded or hammered in), or the radio that Italian speakers “set on fire” (i.e. switch it on).

Productive creation of illustrations in the learning process: In our cooperation with various schools, and during events such as the ones listed above, students create drawings in the process of learning the various collocations. We have found that this increases success in learning, and also generates motivation and interest.

Receptive use of illustrations in the learner’s dictionary: By integrating these illustrations in the learner’s dictionary, learners are provided with material they will use “receptively” in order to better memorize the expressions (though of course they may also create their own images, possibly under guidance of their teacher). No matter whether learners produce images ‘actively’ or use them ‘receptively’, the final result is the same: learners should “see” the image behind a collocation. First the concrete image is seen or visualized, then remembered, meaning that learners will later “recall” this mental image associated with the expression.

Comparing word combinations in Italian and German. A research project.

the Autonomous Province of Bolzano/Bozen - South Tyrol (Division for the Promotion of Education, Universities and Research), with an additional support from the Tyrolean Science Fund (“Tiroler Wissenschaftsfonds” - TWF)